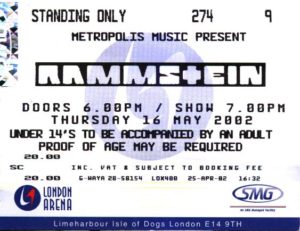 Raging Speedhorn are one of those bands I’d read about, and was aware of the name, but had no idea what they sounded like. Given how frequently they’re mentioned in Kerrang!, I wasn’t expecting much, but I wasn’t expecting them to be as bad as they were. Tuneless noise, with unintelligible barking vocals. As if the vocals weren’t bad enough already, they felt the need to employ two vocalists, for added effect. Truly awful. I had heard some of American Head Charge’s material before, so I knew pretty much what to expect. They weren’t good either, although following Raging Speedhorn almost certainly made them look better than they actually were. But the supports weren’t why I was there, and eventually, the opening strains of “Mein herz brennt” blasted out from the PA, pyros detonated, and Rammstein hit the stage. The set list and the effects were pretty much identical to when they played at Brixton. However, for some reason, they didn’t seem to have the same intensity that was present last time. The pyros were bigger, to make use of the larger venue, but there seemed to be fewer of them. The lighting was better, though, probably the most impressive use of lights at any gig I’ve seen. Although it didn’t quite match the high standards of Brixton, this was far from a bad show, and still probably the best concert I’ve seen so far this year. The highlight track was a spine tingling “Links 2 3 4”, and “Feuer Frei!” also had the same effect.