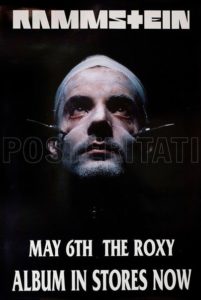 Rammstein, Cubanate, Hansel und Gretyl at the Roxy
NYC
May 6, 1998

I got lucky and had a free pass to this show I would have never paid to have seen, having never even heard of the headline act RAMMSTEIN. When I got to the Roxy I was told they were expecting a sellout crowd of over 2000 people and my initial thought was “where the hell do they expect all these people to fit?” I was surprised to learn that RAMMSTEIN is huge in Europe and especially in their homeland of Germany where they play in the arenas, to 10 or 15 thousand people. This was my first time at the Roxy and my initial impression was favorable, though it looked a bit like a fancy dance club (which I believe it is, actually) the stage was set up “wide”along the length of the club, allowing for maximum visibility. Also, the sound was good during the show, which is the number one issue with me. Finally, tickets were only ten bucks which seems pretty good for NYC seeing how that’s about what they charge for a slice of pizza… Opening act HANSEL und GRETYL, were a local 4 piece with 2 guys and 2 girls. I’m all for local bands, and for women in bands, but somehow these guys failed to excite… Their music seemed to be a lot of sound and fury signifying nothing, with a lot of attitude but nothing to say musically or lyrically. The leather lederhosen was cool and everything but their music, as “harsh” and “angry” as they seemed to be, was totally forgettable. They were kind of like a less talented, generic MARILYN MANSON, if that’s not being like totally redundant… Is that like saying “like a gay, Charles Nelson Reilly”? (I like Marilyn as a person but his music’s kind of disappointing). Well, maybe I’m wrong! HANSEL und GRETYL have a new album called “Transmissions From Uranus”. I think you should buy it! At this point the place was only about a third full…

Next up were Wax Trax record’s CUBANATE, I had some vague memories of hearing their music on late-night radio and thinking “this doesn’t suck…” but not much else to go on. Live, they were intense but a wee bit samey, where the songs kind of seemed to coast along a bit… Once you had heard the first minute ya sort of knew exactly what to expect, though sometimes everything would drop out except the drums or singer, etc… It was sort of like “harsh disco”, you might call it industrial dance…I liked it though, as did the crowd, which had filled the floor by now. They were like an Industrial band with a Hardcore aesthetic… They had a pretty simple light show which was really disorienting (lots of spinning) and fit well with the music. At the end the band exited and the singer stayed and spouted some barely intelligable crapola for two minutes…I think he was wasted…

Finally, RAMMSTEIN. I had heard that they cancelled much of their U.S. tour, only playing five shows here because they couldn’t use their pyrotechnics, and I scoffed. Pyrotechnics? How could they be that important to their show? Well, let me tell you…The whole show was very theatrical and very entertaining. I was really impressed, I had a blast. When they came out , their singer was wearing a long metal coat, which caught fire, it was totally cool. Musically, they were like a blatantly fascistic EuroDisco band with a Metal edge. They reminded me a LOT of LAIBACH (and that’s a very nice compliment), with the goosestep bassdrum rhythm and very inflated, orchestral, Teutonic melodies, with hammering heavy metal guitars. The singer had a very gruff but grandiose delivery, he was a great frontman. He sang only in German. Sometimes the guitarists would drop out and they would stand at the lip of the stage in mid- song with their arms folded across their chests, all defiant and haughty. The whole show was totally ridiculous and very enjoyable. Rock and Roll definitely has a fascistic side to it, both musically and culturally, and these guys have amped it up to the nth degree, while still being smart enough to be in on the joke. Have I mentrioned LAIBACH lately? Every song had a new gimmick with the pyrotechnics: one time sparks shot out of the singer’s shoes, then he had a huge menorah (spelling?) type thing that shot sparks, then there were balls of flame that rolled up towards the ceiling. My favorite gag was when the guitarists’ mic stands caught fire for one song, and they sang backup into the burning mics. There was also a drummer, bass player, and keyboard player. It seemed like they all had silver hair. They were all wearing silvery space outfits and black leather strappy s/m kinds of things except the singer, who wore this kind of quilted fencing ensemble with a huge codpiece (basket). At one point the keyboardist climbed into a rubber raft and got passed overhead through the crowd. Later, the singer feigned sodomizing him after he revealed his huge bulge was from wearing a large dildo, which sprayed “cum” all over the crowd for what seemed like minutes (ala GWAR), it looked pretty cool in the strobe lights. The crowd was totally into it and I was surprised that there were people who seemed to know the words to all the songs. Most of the time the guitars were doing heavy, staccatto chording, but at one point they broke into this 10 second dual lead gutair solo that was all trilling “hammer-ons” and I cracked up, it was so SCORPIONS! I don’t always go for bands with a gimmick but these guys did it really, really well, every detail had been thought out, and it was hilarious, too. All that wouldn’t have mattered to me if the music was lacking but I thought that was great too. (I’ve seen LAIBACH live and they were also pretty funny, though more subtle.) RAMMSTEIN, a band I had known nothing about and couldn’t care less, had completely conquered me.