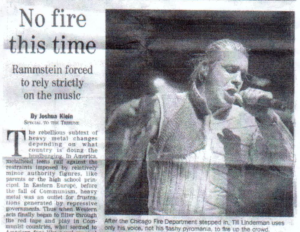 NO FIRE THIS TIME RAMMSTEIN FORCED TO RELY STRICTLY ON THE MUSIC
Joshua Klein. Special to the Tribune
CHICAGO TRIBUNE
The rebellious subtext of heavy metal changes depending on what country is doing the headbanging. In America, metalhead teens rail against the restraints imposed by relatively minor authority figures, like parents or the high school principal. In Eastern Europe, before the fall of Communism, heavy metal was an outlet for frustrations generated by repressive governments. Thus when Western acts finally began to filter through the red tape and play in Communist countries, what seemed to American fans like novel musical diplomacy seemed to audiences in the Soviet bloc the stuff of revolution.

The six members of European superstars Rammstein grew up in East Germany before the fall of the Berlin Wall. Now the neo-industrial band avidly espouses the tenets of free expression, though in general it eschews politics in favor of lurid lyrics. Rammstein (whose name, appropriately enough, translates roughly to “battering ram”) has gleaned more than a few shock tactic tricks, like bondage gear wardrobes and staged scenes of S&M submission, from fellow faux freaks Marilyn Manson. But Rammstein’s hulking singer (and former Olympic swimmer) Till Linderman is unique in his propensity to light himself and everything around him on fire, and it’s his pyromania that has played a big part in the band’s rapidly spreading reputation.

The Chicago Fire Department curtailed Linderman’s right to blow things up Monday night at Metro, so Rammstein had to stick with less flammable forms of entertainment. Keyboardist Flake rode an inflatable raft out into the sold-out crowd, and Linderman lashed himself with a whip. But most imposing was Linderman’s insistence on singing in German. Translations don’t do justice to songs like “Du Hast” and “Tier,” whose English equivalents miss the meaning in the double-edged words. The guttural growls and rolling “r”s of Linderman offered the thrill of something different, something verboten. The crowd even shouted along with the title track from Rammstein’s domestic debut “Sehnsucht,” and cheered wildly in response to “Engel,” the band’s most potent pairing of pop hooks and metallic bite.

Though watching Rammstein play without fire could have been akin to watching a horror movie with the lights on, the band revealed that at the heart of its art lies some truly potent songs. Rammstein overcame the conspicuous lack of explosions with its danceable dirges.