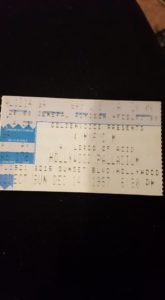 You know guys, I don’t see something in here that is very important. There are no reviews of anything but the cheesy Korn tour, in which RAMMS+EIN were just not as good as I know they are. So here is a different insight.

Yes, I did go to Family Values in Los Angeles on October 9, 1998. And yes, I went solely to see RAMMS+EIN. It was indeed a good performance: the sound was ok, my seats allowed me to see something, and the song line-up was pretty good. But that is not what I am here to tell about, since everyone has read about it countless times. I am here to describe my experience at a KMFDM concert on December 14, 1997.

There had been rumors for months that a German hardcore metal band would open for KMFDM and Lords of Acid. I already knew of this band from compilations such as Mortal Kombat: Annihalation, and Lost Highway. But I didn’t think much of it. The day of the concert, everyone had expected to see Lords of Acid open for KMFDM, and they expected some other band in the way of the real player. The Hollywood Paladium is a REAL place for a concert – not a seat in the whole building; just one gigantic mosh put – the PERFECT site for a RAMMS+EIN performance. When we had come inside and took our spots on the floor, the show was about to begin, and we had no idea what we were in for. Until this moment, I had barely listened to Heirate Mich and Engel; I did not know any other of their songs. All of a sudden the lights go out, and this deep, deep bass starts playing. It gets louder and has a beat to it that gets faster. BOOM! They go into the song “RAMMS+EIN”. We were by six of the 30 or 40 something huge speakers. And guys, you know how that song can get on a killer sound system. It was incredible! They played almost all the songs from Herzeleid that day, and perhaps one of the unreleased songs, since I still don’t recognize it. One thing I must tell you about is that during one of the songs (at the time I didn’t know which one, I just knew it sounded good) Flake went away from his keyboard holding some white things in his arms. Till was singing at the moment, and the lights were low, except on him. Flake then kneeled before him, and one by one, smashed two long fluorescent light tubes against Till’s bare chest! That is a must see, and unfortunately, it is something that they did not do during the Family Values concert. It is because of this experience that I am such a devoted RAMMS+EIN listener. They stole the show – when KMFDM came on, people were throwing things at them and yelling to get RAMMS+EIN back on the stage!!! That was unbelievable!